Two Southern Ladies that will share tips, recipes, stories and even a few secrets. about embracing the second half of life.

No Widgets found in the Sidebar Alt! 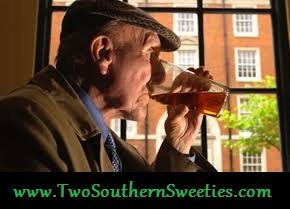 We can all enjoy a little Irish humor!

Walking into the pub…

Patick said to the bartender, “Pour me astiff one, Sean. I just had another tiff with the little woman.”

“Well I’ll tell ya now when it was over,” Patick replied, “herself came to me on her hands and knees, she did.”

She said, “Come out from under that bed, you gutless weasel

A ventriloquist is telling Irish jokes in Davy Byrne’s pub in Grafton Street, Dublin, when, O’Leary, an irate Irishman stands up shouting, ‘You’re making out we’re all dumb and stupid. I oughtta punch you in the nose.’

‘Not you,’ says O’Leary, ‘I’m talking to that little fella on your knee.’

One day an Irishman, who has been stranded on a desert island for over ten long years, sees an unusual speck on the horizon.

“It’s certainly not a ship,” he thinks to himself. As the speck gets closer and closer, he begins to rule out the possibilities of a small boat, then even a raft.

She approaches the stunned man and says to him, “Tell me how long has it been since you’ve had a cigarette?”
“Ten years,” replies the Irishman.

With that, she reaches over and unzips a waterproof pocket on her left sleeve and pulls out a pack of fresh cigarettes. He takes one, lights it, takes a long drag and says, “Faith and begorah! Is that good!”

“And how long has it been since you’ve had a sip of good Irish Whiskey?” she asks him.

She reaches over, unzips her right sleeve, pulls out a flask and hands it to him. He opens the flask, takes a long swig and says, “Tis absolutely fantastic!”

At this point she starts slowly unzipping the long zipper that runs down the front of her wet suit, looks at the man and asks, “And how long has it been since you’ve played around?”

With tears in his eyes, the man falls to his knees and sobs,
“Oh, Sweet Jesus! Don’t tell me you’ve got golf clubs in there too.”

Six Irish men were playing poker when one of them played a bad hand and died.

The rest drew straws to see who would tell his wife. One man draws the shortest straw and goes to his friend’s house to tell the wife.

The man says to her, “Your husband lost some money in the poker game and is afraid to come home.”

The wife says, “Tell him to drop dead!” The man responds, “I’ll go tell him.”

An Irish priest is driving down the road and is pulled over for speeding.
The garda smells alcohol on the priest’s breath and then sees an empty wine bottle beside him.

He asks the priest, “Sir, have you been drinking?”
The priest responds, “No officer, just water,”
The policeman asks, “Then why do I smell wine?”
The priest looks at the bottle and says, “The Good Lord! He’s done it again!”

If you enjoyed A Little Irish Humor you may also enjoy…

In Honor Of Idiots

Be sure to leave us a comment below to let us know what you thought of this post.

This site uses Akismet to reduce spam. Learn how your comment data is processed.

Our Most Popular Posts